Every Cathode-Ray Tube (henceforth CRT) has a label applied on the funnel bearing the tube type number along with other information (certifications, warnings, etc.). The type number is an alphanumeric sequence where (groups of) letters and numbers define various features of the tube (application, size, etc.). Prior to the introduction of a universal system, each region active in CRT manufacturing (USA, Europe, Japan) had its own system for CRT designations[1].

The type number consists of three symbols and optionally one or more suffixes.

With a few exceptions, only A tubes are used for TV receivers and arcade monitors. The difference between A and M tubes concerns the spacing or pitch between corresponding points on line trios at screen center: this value is approximately 0.82mm for 110° A tubes and 0.66-to-0.82mm for 90° A tubes[2]. M tubes have a finer pitch as they are usually reserved for professional monitors where the user sits at a closer distance from the screen.

Only W or X are used for TV (and arcade monitor) tubes.

According to this system (adopted also by other Asian manufacturers), the type number consists of three to four symbols.

According to this system the type number consists of five to six symbols of alternating groups of letters and numbers.

For the difference between A and M tubes, see above under the European system (Pro Electron). Note: some manufacturers (e.g. Sony, Panasonic) use M tubes not only for professional monitors but also for some of their consumer TV receivers.

The third symbol letters are allocated in blocks to the three type assignment agencies as follows:

Note: seeming counterexamples to this distribution can usually be explained by custom labelling: when using tubes of different makes in their own receivers, some TV manufacturers require from the tube manufacturer a label bearing their name and often omitting the tube manufacturer's name. As a result, a tube made in one region may end up with the label of a manufacturer from another region: 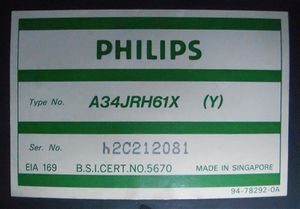 The remaining unused blocks of letters are assigned by mutual agreement to each assigning agency when required.

Note: Toshiba labels clearly show the correlation between sixth symbol and yoke. When the sixth symbol is present, a note informs that the yoke is permanently bonded to the picture tube: 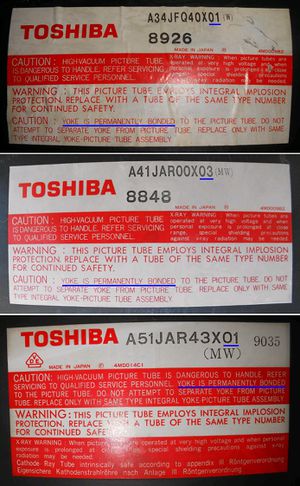 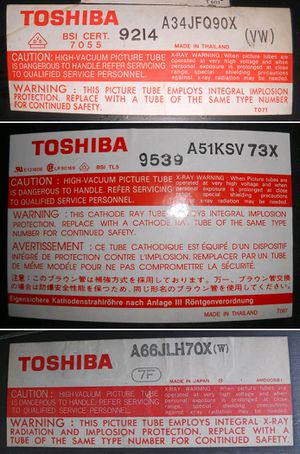 Manufacturers sometimes add prefix or suffix letters to type designations on their tube labels or in their commercial literature. Prefixes or suffixes are not part of the designation. The agencies assume no responsibility for the use or meaning of such additions.

Even after the introduction of the new system, manufacturers were free to use the older designation systems when necessary: 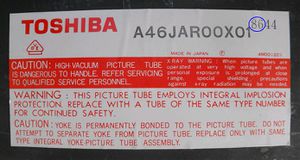 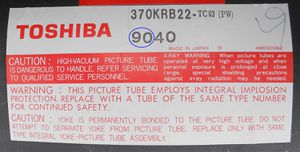 The Worldwide Type Designation System (WTDS) has remained in use until the end of the CRT production era (late 2000s).

According to this system, the type number consists of three to four symbols.

Samsung proprietary system. On a few Samsung tubes the type number is very similar to a WTDS number but with notable differences. The first symbol (application category, e.g. A) is missing and the second symbol designates the diagonal measure in centimeters of the CRT face instead of the viewable screen. Also, the sixth symbol is replaced by what looks like an EIAJ suffix.

The first symbol is a two-digit number designating the minimum diagonal in centimeters of the CRT face (e.g. 67 = 67cm).

As is known, the sizing method used by consumer TV manufacturers in the US differs from that of their European and Japanese counterparts[3] in that the former use the diagonal measure (in inches) of the viewable screen while the latter use the diagonal measure (in inches) of the tube face[4]. As a result, what is called a 19-inch TV in the US is a 20-inch TV in Europe and Japan, etc. This standard industry practice simply reflects the different sizing methods of the respective tube designation systems. The introduction of a universally accepted system (WTDS) which only considers the viewable screen diagonal did not change this deep-rooted habit: European and Japanese TVs and monitors kept being marketed according to the measure of the tube face diagonal, which may be confusing when CRT products of one region are imported into another region.

The chart below lists each size as a face / screen measure in both inches and centimeters. Inch sizes are obtained by rounding up or down the actual diagonal size in centimeters. For instance, 20" (51cm) / 19V (48cm) means that a tube having a face diagonal of 51cm and a viewable screen diagonal of 48cm may be marketed as either a 20" or a 19V (i.e. 19" viewable) tube, depending on region. The third and fourth columns show the discrepancies between the actual size and the nominal market size. The fifth column indicates the screen contour design (Full Square means square corners and straight sides[5]). 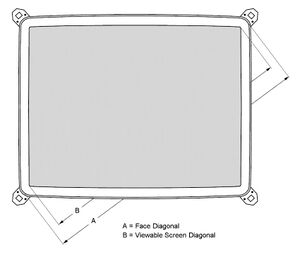 According to EIA/JEDEC the designations for base and pin connections consist of three symbols, with a hyphen between the second and the third symbol.

The first symbol is the letter B if the base includes an auxiliary (plastic) fixture for protection, insulation, identification and indexing.

The second symbol is the number of pins present in the base.

The third symbol (following a hyphen) is a three-digit number assigned in numerical sequence independent of the first two symbols. This symbol defines the unique mechanical characteristics of the base but not the materials or the electrical connections. 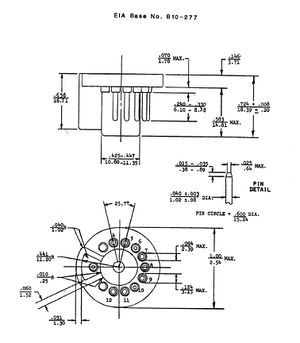 Thomson (which includes Polkolor, Videocolor and since the late 1980s RCA in the US) didn't put pin 12 in this base type so the total number of pins in the CRTs of this manufacturer is 9. 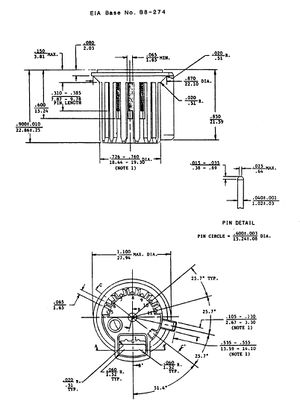 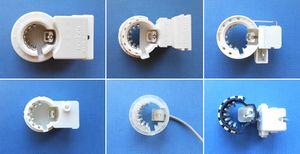 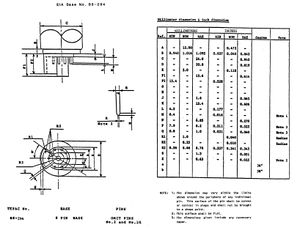 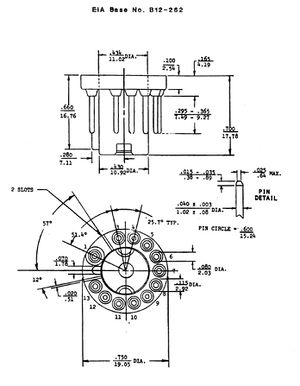 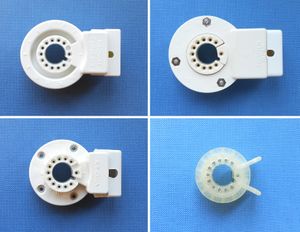